I have posted two travel articles on Africa so to change the scene here is one from my first (1966) trip to India. I found India fascinating. It gave me the background for two of my early thrillers, FRONTIER OF VIOLENCE and STRANGLERS MOON. Learning the history and mythology of India, and reading the classic epics of the RAMAYANA and the MAHABHARATA also inspired my later heroic fantasy trilogy THE FIFTH PLANET. I transported my version of the mythological roots of Hindu India back into the period before the last great ice age to create a whole new fictional world.

If you are a fan of Tolkien, David Eddings or David Gemmell, then you might like my heroic fantasy too. THE FIFTH PLANET (THE SWORD LORD, SWORD EMPIRE & SWORD DESTINY) and now THE THIRD PLANET (THE GODS OF ICE, THE GODS OF BLOOD & THE GODS OF FIRE) are mining the same rich fictional veins 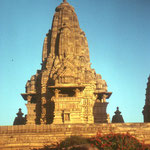 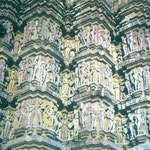 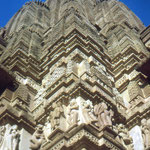 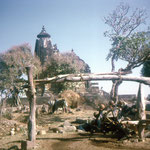 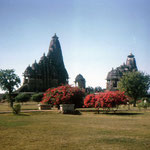 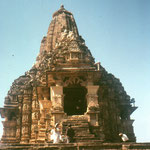 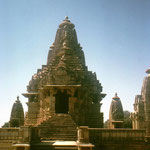 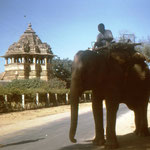 HERE IN THE HEART OF INDIA ARE MAJESTIC TEMPLES RECORDING THE MYTH, HISTORY, AND ARTISTIC ACHIEVEMENT OF A BYEGONE AGE.

They soar like man-carved mountains into an indescribably blue sky, rampart upon rampart of ascending red sandstone, reaching up toward heaven and the gods. Each temple is not only a triumph of religious architecture, but also a glory of religious art. Their walls and ceilings are sculpted with a fantastic array of friezes, panels and figures. Here are all the gods and mythology of ancient India, mingling with men and beasts in war, sport and play.

War elephants march in encircling bands. Horseman and chariots rush to furious battle. Hunting parties pursue and kill their prey. Voluptuous dancing girls are frozen in graceful poses. Beautiful women and celestial angels hang languidly from doorways, or demurely attend to their make-up and mirrors. Men and women, gods and consorts, form amorous loving couples, or perform erotic group gymnastics. Human beings struggle with the dragon-beast of their own desires, symbolizing the eternal battle of man with the evil within himself. Again and again the scenes and images are repeated in elaborate and explicitly detailed sculptures that fill every niche, ledge and panel.

Present-day Khajuraho is a small, and except for its surrounding temples, insignificant village in the Chattarpur district of the central India state of Maya Pradesh. Draw a triangle to link up New Delhi, Bombay and Calcutta, and Khajuraho will be found a little to the east of its centre. The road from the north east makes a winding approach through vast tracts of dry-leafed jungle and red-earth bushland, a moving kaleidoscope of sun shafts and shadows, browns and greens. It is a landscape of scattered, jungle-covered hills, bamboos and creeper-tangled trees. The sun scorched great piles of black slab rocks. A peacock flashed the brilliant fan of its eye-patterned tail feathers. A troop of long tailed lemur monkeys leaped quickly away into the gloom, chattering with fear, or excitement.

A thousand years ago this region of India was ruled by the Chandellas, a dynasty of kings who made Khajuraho the religious capital of their empire. Khajuraho flourished and become became resplendent as their power grew and became dominant, but then declined as the dynasty declined. This cycle of rise and fall lasted over a period of five hundred years, from approximately 900 A.D.

The Chandella kings claimed the descent of an ancient and noble lineage. One of the legends told by their poets says that their ancestors were the Moon god and the beautiful daughter of a Brahmin priest. The girl bathed one evening in a clear, moon-lit pool, when the Moon God saw her and was so dazzled by her loveliness that he could not refrain from embracing her. The maiden was so outraged by her ravishment that to console her the god promised her the son of their union would bring such honor and glory that it would more than erase all of her humiliation and shame. In due course a son was born, a mighty tiger-slayer at the tender age of fifteen, and destined to found the Chandella dynasty.

The romantic-hearted may believe this story if they will, for the origin of the Chandellas is obscure, shrouded by time and the shifting patterns of power and feudalism. What seems more likely is that they were originally tribal chieftains of aboriginal stock. And what is certain is that they did rise to become kings and emperors, expanding their domain with conquests and war, and celebrating their victories with a golden age of temple-building to give due thanks to their gods.

It is believed that more than eighty of these magnificent temples were erected by the Chandella Emperor-Kings at the brilliant peak of their power between about 950 A.D. and 1050 A.D.

During these one hundred years the Chandellas reigned supreme. But then successive waves of Muslim invaders from the west penetrated ever deeper into central India. In company with many other Hindu kingdoms and dynasties, the Muslim conquests caused the decline and eventual departure of the Chandella kings from these turbulent pages of India's history.

Today only a score of their temples remain. In size they can be beaten by temples and cathedrals elsewhere, but in style and design, in the sheer, all-embracing wealth of art and imagery, and as a spiritual and sensual record of their time, they are unsurpassable.

The surviving temples are scattered over an area or about four square miles, in three main groups to the east, west and south of Khajuraho village. My companions and I had arrived on an overland coach expedition and we made an early start to visit the eastern group of temples. We walked through the narrow lanes of the mud-plastered village and out into green and well irrigated fields. In the flat rural landscape we counted over a dozen scattered wells where harnessed bullocks walked endless circles to turn creaking wooden water wheels. The wheels brought up chains of clay pots which tipped their contents into the narrow irrigation channels. In the fields more bullocks dragged crude wooden ploughs, steadied by thin-legged, turban wearing farmers. Sari-clad women passed us balancing polished brass water pots on their heads as they went to and from the wells.

The eastern group was actually two groups, a cluster of three Hindu temples, and nearby a group of Jain temples and shrines built upon one large base platform. Each group of Khajuraho temples contains at least one which is best likened to a cathedral among churches, which gives the whole group the visual impression of surging clusters of stone spires rushing heavenward, a deliberately elevating effect. Circling bands or straining figures, humans, gods and beasts, all seem to be doing their utmost to thrust each magnificent edifice into the sky.

The western group contains eight of the most splendid monuments in a park-like enclosure of flowering purple bougainvillea and green lawns. The great pinnacles of climbing spires which form the largest temples were to the sun god Surya, and the most impressive of all to Shiva. Smaller temples enshrine Nandi, the sacred bull on which Lord Shiva is often mounted, and the Boar incarnation of Vishnu. Each one, both inside and out, is another veritable treasure house of Hindu art where every image has been painstakingly carved by a master craftsman.

It was dusk when I walked alone to see the last two temples in the southern group. The air was blessedly cool now in the long shadows thrown by the trees. The night air was still filled with the tinkle of cow bells and the creaking of well wheels as the bullocks still performed their wearying tasks. A fainter jangle came from the silver anklets worn by some or the village women who preceded me down the dusty path.

The damaged temple stood alone in the fields, exquisitely carved and executed like all the rest. However, what seemed a fitting end to my explorations was the discovery of the few elegant columns and lintels which are all that remain of the Ghantai temple. Seen against the twilight gloom, faintly pricked by a few stars, the silent skeleton columns cast ghost shadows.

It was a reminder that the Chandela kings had indeed come and gone, their five-hundred year reign was but a brief swirl in the eternal flow of time. Their glory too is almost gone, except for the traces