CITY OF THE GODS 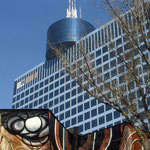 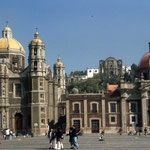 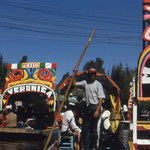 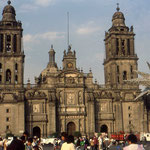 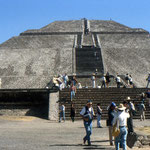 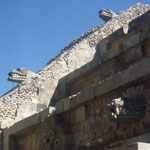 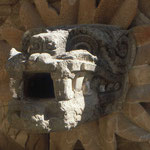 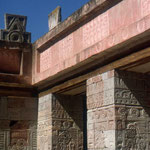 CITY OF THE GODS

Okay, so I chickened out. All those dire warnings about bag slashers and taxi-driver/muggers in Mexico City almost made me cancel my three-night stop-over at the last minute. Instead I played safe and did all my exploring with a driver/guide arranged by my tour company. I only had two days anyway and I wanted to pack in as much as possible.

With three of us sharing the car it cost US$ 120 each, and was money well spent. Our driver was “Charlie”, American by accent, but Mexican by birth. An active seventy year old, he could remember when the population of Mexico as a nation had been little more than today’s population of Mexico City, which was now a vast sprawl from the skyscraper centre to the drab outer shanty towns that climbed the encircling mountains of the surrounding valley.

We drove south through magnificent wide boulevards, past a bewildering variety of architectural styles, and the blue glass, silver-domed tower block of the World Trade Centre. The magnificent multi-cultural centre before it was gorgeously decorated with striking murals by one of Mexico’s three greatest mural painters. There are murals everywhere in Mexico City, from humble shop-fronts to the magnificent staircase in the National Palace, sublime mixtures of history brought to life in dramatic art and vivid propaganda.

On we went, past dusty parks and vibrant advertising boards, and then through leafy suburbs with cobbled roads and elegant plaster-washed villas behind high walls, all with a general air of sleepy old Spain. We were headed for the Olympic Stadium, and then the University with its library block, again covered in mosaic murals, but the highlight was the floating gardens at Xochimilco.

This was Mexico City’s favourite Sunday picnic spot, the park and the flat-bottomed red and yellow boats that jam-packed the lake all filled with Mexican families out to enjoy themselves. We took one of the boats on the long, winding trip down the narrow lake, something like being water-borne on slow-motion dodgem cars with men or boys straining at the long poles. Punting on the Cam was never like this, but despite the crowded confusion and inevitable collisions it was all good-humoured and relaxed. Narrow boats with vendors selling fruit, toffee apples, Indian ponchos and cheap jewellery, darted or drifted through the throng. Mariachi bands played aboard their own boats, happy to drift alongside and play for a few pesos, the sound of their trumpets and guitars mixed with the cheerful hub-bub of gossip and laughter.

On the way back we took in the Archaeological Museum, rightly acclaimed the most unmissable in Mexico with is splendid collection of artefacts and re-creations of the ancient Aztec, Olmec, Toltec and Maya cultures.

Nine o’clock of day two and we were on the road again with Charlie, this time heading north. First stop, the Basilicas of Gaudalupe, one of the most revered sites of pilgrimage in Mexico. Here, in 1531, the Virgin Mary appeared to a Mexican Christian named Juan Diego, and asked for a chapel to be built on this particular spot. The first, yellow-domed Basilica to be built was visited so much that eventually it began to sink into the soft sand under its foundations, so now a vast, circular modern Basilica has been built that can hold thousands of worshippers. Many pilgrims make their final approach to the entrance on their knees, and inside a moving conveyor belt carries them to and fro behind the altar in rapt slow motion, all with their faces upturned toward the image of The Virgin.

“Watch their faces,” Charlie said several times during the day as we moved between churches. The poorer people were totally committed to their Faith, for often it was all they had.

We drove fifty kilometres outside the city to the vast, sprawling pre-Aztec site of Teotihuacan, for me the highlight and main reason for my visit to Mexico City.

The largest archaeological site in Mexico, Teotihuacan comprises three huge pyramids and a host of smaller temple platforms and ruins aligned along the broad two and a half mile Avenue known as the Avenue of the dead. At the south end is the Pyramid Temple of Quetzalcoatl, with its famous terrace of plumed serpent heads, at the north end the magnificent Pyramid of the Moon, and two thirds of the way between on the Eastern side, the largest pyramid of all, the great Pyramid of the Sun. From the top of both the Sun and Moon pyramids are awe-inspiring views of the whole ruined city, its origins and the identity of its first builders both lost in time. The Aztecs found it already abandoned and called it The City of The Gods.

With Charlie moving the car between entry points we saved a lot of walking and still covered it all; but good boots, a sun hat, sun cream and water bottle, were still near essential in the scorching heat.

Back to Mexico City and a final tour round the Zocalo, the great plaza in the heart of the historical city centre. Time to visit the Cathedral, tilting slightly after the 1985 earthquake and filled with a maze of green scaffolding tubing inside; and the National Palace with that glorious mural staircase unfolding the entire history of Mexico.

We tipped Charlie well, for without him we would not have seen half of what we had covered in the limited time available.

So is Mexico City so dangerous? We certainly didn’t feel so insulated in our own car with Charlie to guide us. There were squads of armed riot police at Gaudalupe and around the Zocalo, but Charlie said that this was because the Pope was due to visit in a few days time. (This was in January of 1999.)  Either way, it was a fantastic two days which I’m glad I didn’t miss.