AYLESBURY -- A GREEN AND PLEASANT VALE 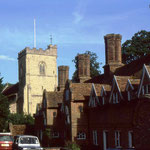 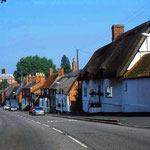 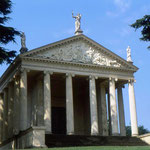 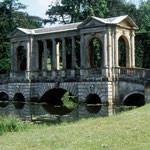 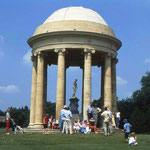 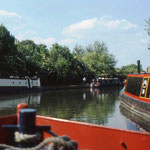 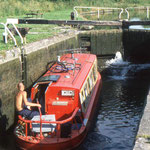 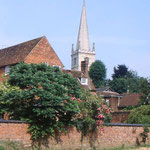 AYLESBURY – A GREEN AND PLEASANT VALE

I have to admit that the Vale of Aylesbury was barely known to me -- until one Sunday evening when the area was featured on the TV show Songs of Praise. Immediately I was seized with the desire to go there. The scenery looked beautiful, the towns and villages oozed charm, and the people looked warm and friendly. I just knew it would be the ideal place to spend a few pleasant days.

By mid-summer the opportunity presented itself and off I headed. The June sunshine was dappling the meadows and hedgerows as l drove into the gentle green vale, and a glimpse of brightly painted canal boats as I passed over a hump-back bridge had me pulling over and reaching for my camera.

I made my way down to the towpath. Here I was on the bank of Grand Union Canal which stretched all the way from London to Birmingham. Once it was a main artery of commerce as horse drawn barges pulled the fuel and fruits of England’s industrial revolution to and fro. Now it was a pleasant winding waterway given over to pleasure cruising and serious walking.

A canal boat in smart livery of red, gold and black cruised slowly past, and I reflected that this was probably more my style of travelling.

Back on the road I drove slowly through the pretty town of Ivinghoe, stopping to look at Pitstone Windmill, one of several that dot the tourist map of this part of Buckinghamshire. Under the wide sweep of the mill sails the slender spire of Ivanhoe’s church showed above the trees on the skyline. It was a scene of pastoral English tranquility that was almost timeless.

Finally I reached the pleasant market town of Aylesbury. There’s a special magic about markets. They are local meeting places as well as places to buy and sell and Aylesbury’s was no exception. Here the colorful Saturday market thrived around the elegant clock tower in Market Square. A cheerful bustle of people shopped and chatted, renewing old friendships and catching up on the local news.

Not far from the busy heart of the town was peace of the churchyard and the 13th century church of St Mary. This is the old part of town with sleepy lanes and traditional houses and cottages, an area for relaxed strolling and quiet reflection.

Aylesbury is in fact a splendid mixture of both ancient and modern England. Two up to date shopping centers grace either side of the Market Square and down by the old quay a blue glass and red brick insurance building is an eye-catching example of modern architecture.

I went into the Friar’s Square shopping center, the larger of the two, with over eighty shops, cafes and restaurants. The center also boasted elegant fountains and trickling water gardens, and offered plenty of seating where shoppers could take a break, chat, or just people watch.

I spent the rest of the afternoon exploring Aylesbury. Then, as the evening was still warm and bright, I drove out to the small village of Quainton where goblins and faeries and headless horsemen are all said to roam around Quainton Hill. I saw no evidence of those fanciful figures of English folklore, but I did discover a delightful little village that was well worth the visit.

There was a spacious green, with at the top a mediaeval Friar’s Preaching Cross. Rising beyond was Quainton Hill and the tower of what was once the tallest windmill in the county. There were charming Tudor cottages, and a set of splendidly gabled almshouses close by the church. It was unspoiled England still lingering into the 21st Century, and sitting with a pint of best bitter ale outside the Green Dragon pub was the best way to enjoy it.

The next morning I was heading for Stowe Landscape Gardens just north of Buckingham, but on the way I stopped to photograph the charming small, mainly Georgian town of Winslow, where every other cottage seemed to be thatched, or ancient, or both.

It was another bright, sunny morning, with a perfect blue sky background for the yellow limestone Church of St Laurence. Red and yellow roses lined the path encircling the church, and being Sunday the bells were ringing. It reminded me of that Songs of Praise program which had first stimulated my interest, and seemed very appropriate.

The gardens at Stowe cover roughly one hundred acres of lush green parkland, an area of rich green woodlands, valleys and rolling hills, broken up and reflected back in a series of narrow lakes. In the centre is magnificent Stowe House, which is now occupied by Stowe School.

There are breath-taking views of the house across the lakes, but what really sets this superb National Trust property apart from all the rest is not just that the park is perfectly landscaped, but that it is also decorated with over a score of temples, arches and monuments, all ranging from the Grecian to the Gothic. These are all spaced out among the natural landscapes so that they are almost hidden from each other, but not quite. You can always see at least one other feature.

There was a gorgeous Palladian Bridge, and from the steps of the nearby Temple of Friendship was one of the best views across the Octagon Lake with several other monuments and towers showing above the farther hills.

I happily spent the rest of the morning there. As a small boy I had explored all the local woodlands with my playmates, usually in search of lost cities or hidden temples, which only existed in our imaginations. Here there was a real hidden temple behind every screen of woodland: the great Doric Temple of Concorde and Victory, that could have been lifted straight off the Acropolis in Athens, a bizarre Gothic Temple, a delicate little Chinese Temple, the Temple of Venus, and many others -- and the small boy that was still inside me was delighted.

I could have stayed all day but I had decided to indulge in a Canal Cruise. That brief initial glimpse was not enough. I drove back through Winslow and Aylesbury to find Pitstone Wharf. There bought my ticket with an hour to spare and just time for lunch in the pub across the road. I was too late for the Sunday roast, but they served me an excellent ploughman’s, the traditional English cheese, pickle and salad.

Grebe Canal Cruises run regular one-and-a-half hour cruises up to the picturesque village of Marsworth at the foot of the Chiltern Hills, passing through idyllic scenery and lifting up through two locks. The Chiltern Countess was a typical long, narrow canal boat, fitted out to take up to sixty passengers in slow, lazy comfort.

It was just a taste of the Grand Union Canal, which two hundred years ago was one of the triumphs of the industrial age, and one of the most important commercial waterways in England.

Today it is mostly given over to the leisure industry, to the walkers, anglers, and cyclists, who enjoy the wide towpaths, and to the boats that enjoy the relaxed pace of the slow-moving waters. We passed many other converted canal boats, some for hire and cruising, and others moored up as houseboats. The majority of them were brightly painted, with red black and green predominant, making splashes of vivid color all along the waterway. White swans glided gracefully and haughtily between the boats, while red-billed moorhens bobbed daintily among the overhanging branches by the banks.

It was a blissfully unhurried experience, the walkers on the towpath were moving faster, and when we stopped to let a lock fill or empty with water, the walkers disappeared ahead. The gates of the last lock creaked gently open to let us down to the last level again, and all too soon we were bumping back against the quay at Pitstone Wharf, where we all climbed back ashore with some reluctance.

Monday was the last day of my tour and I spent the morning in Buckingham, another vibrant market town, and this time built in and around a meandering loop of the Great River Ouse. The Saxons first built a fort here a thousand years ago, and in 914 King Edward the Elder built fortified strongholds on either side of the river to create a frontier town to stand against the Danish invaders coming down from the north.

As I approached the church I passed the Old Town Hall, a solid Eighteenth Century building topped with a small clock tower and a stately golden swan. The swan is the emblem of Buckingham and was first recorded as part of the heraldic crest on the arms of Humphrey, Duke of Buckingham in the Fifteenth Century.

At the top of Castle Street, just before entering the churchyard, I passed the Old Coach House. On its black-timbered gable was some beautiful orange colored pargetting, the raised plaster decorations more familiar from my native Suffolk. The magnificent church of St. Peter and St. Paul was topped by a tower and a spire, and the Saints, Peter and Paul, were side by side in their carved niche above the handsome porch door.

Leaving the churchyard I passed the old Methodist Church on the corner. Two passing ladies informed me that it was now used partly as a University Lecture Hall. They then directed me down toward the river, my way leading through the old churchyard and the site of the original Thirteenth Century church that had been demolished in 1776. It was now a green haven of shading trees over old tombs.

The riverside walk was a delight, taking me past rippling weirs and parkland, and offering regular views of the church spire through screens of willow trees and rooftops. On the bridge at Bridge Street, where I turned back into the town, I found one of the best views of the church and river.

I came back to the center to look at Buckingham’s landmark building, the Old Town Goal, looking like a small, turreted castle. It now houses the Tourist Information Center and a fascinating little museum. “You shouldn’t miss the Chantry Chapel,” I was told. “It’s the oldest building in Buckingham, and it has a lovely Norman Door. And when you’ve seen that, keep on up that road and turn right, and you’ll find Castle House. Catherine of Aragon stayed there, and during the Civil War King Charles held one of his Councils of War in there.”

Like all English tourist centers the place was a mine of information and enabled me to complete my tour of Buckingham, my last stop on my all-too-short tour of the lovely Vale of Aylesbury.