REFLECTIONS ON A CLEAR NIGHT 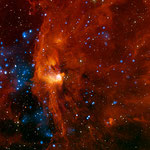 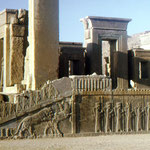 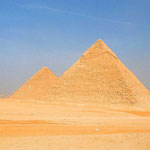 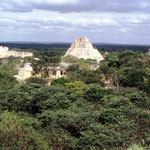 REFLECTIONS ON A CLEAR NIGHT

How we lay fearful upon the hard sands,

And could not dream nor sleep.

The shadows of the racked spear blades,

And the fine, tasseled tents of our noble Lords,

Fell across our faces.

The army lay silent around us,

And on the far black rim of the desert,

Glowed the bright camp fires of the enemy.

That night we watched these galaxies of stars,

And thought them All-seeing Gods,

And prayed for their benevolence.

Then came the awful dawn,

And the armies formed their grim and glittering ranks,

In waves of flesh and steel.

And the great shout arose,

A vast roar of human thunder,

To their brief and bloody glory.

And you were slain, oh, my brother,

Although they did not carve for you a Timeless Tomb,

As they did for our Great King.

And after you fell,

I fought on with a savage fury,

Until my sword ran red,

And the crimson dripped from my naked arms.

And later I wept,

For you, my brother,

And for those I had slain in your vengeance,

And for that part of my own small soul,

That was damaged in the battle.

How we walked beside the silent river,

You were the sweet daughter of the High Priest,

And I a reckless Captain of the Palace Guard.

We stood away from the city,

In the cool shadow of the palm grove,

To gaze at these same starry heavens,

Reflected on the placid surface of the Golden Nile.

You wore a flower in your silk-black hair,

As red as your lips,

But not as soft and tempting.

Your eyes smiled when I kissed you,

And the breeze caressed us both,

Through the milk white cotton of our robes,

As we caressed each other.

They had buried Pharaoh that day,

A million slaves had toiled to build his pyramid,

And the priests had slaughtered another thousand,

To guard his journey through the underworld.

It was a day of grief and wailing,

Except for we two,

For we had our boundless love,

And the stars that spoke of eternity,

That would surpass even the death of Pharaoh.

And I would not have cared,

As long as you were alive,

And willing to receive me,

How we came down from the high passes,

Through the bleak and bitter mountains,

And there was ice frozen into our beards,

And into our eyebrows.

And piled the snow upon our rough-spun cloaks.

It was a long and perilous Journey.

We travelled across the roof of the world,

And Cheng felt to his death,

As we skirted the great glacier,

And his camel and all his trade goods,

Vanished with him into the abyss.

By day our mark was the rising sun,

And by night we made our navigation,

By these same bright stars that sparkled,

And by the lone north star,

That burned more clearly than any flame.

Then we came at last to the warm valley,

And we rested in the lacquered pavilion,

Where the parakeets and finches,

Made darts of feathered color,

In the scented flower garden.

We had sold all our silks and spices,

And now there was wine, and meat, and fruit,

And the eager, laughing girls.

You bade me take one to my bed,

For after the journey and the laughing girl,

Truly I was at last a man.

And on the return journey you died,

And I buried you in a lost wilderness,

And then led our caravan home,

Because I was a man.

How you came to me in your royal raiment,

Of puma skins and scarlet feathers,

With golden bracelets on your arms and ankles,

And the necklace of green jewels,

About your slender throat.

You paid me homage,

As befitted the father of the Chosen One,

And I kissed your feet,

As was due my Sacred Son.

And then we went into the garden,

And talked for the last time,

Under this same canopy of stars.

It was your thirteenth year,

The twelfth month of your reign

And the final day of your short, sweet life,

And when the sun broke the long night,

Into the shattered rays of fateful morning,

I let lesser men lead you away.

I watched with pride and anguish in my breast,

As you climbed with unfaltering step,

With your eyes fixed upon the ascending sun.

And there on the high sacrificial altar,

And a pious prayer,

They tore out your living heart,

To offer it still beating,

To the Great Plumed Serpent,

Do you forgive me yet?

How you teased me with your bare black breasts,

And your wicked, knowing eyes.

And how I neglected my father s cattle,

To pursue you over the rich, grass plains,

And how I would have loved you,

Where you waited to be caught,

Except that we found the paw mark of the leopard,

In the soft earth where we would have lain.

But later my father saw your uncle,

And they drank beer and made wise talk,

And agreed the bride price of twenty cattle.

And while they bargained,

We crept away from the village,

And we made our own betrothal,

Under this same glorious sky.

I saw these stars reflected in your wicked eyes,

As we became One in Love.

That stolen love was all,

For before marriage I had to prove myself,

And in the Lion hunt my shield broke,

And my spear arm failed me.

My dying turned the golden grass,

To a smeared and bloody red,

It was the beast that roared victorious.

You wept long and loud,

Until after my death ritual,

And then you wed another.

When I first came to the Pagoda,

And waited in trepidation at the gate,

Until you came gently to meet me,

And you threw away my sandals,

And shaved my head almost to the bone,

And gave me my yellow robe.

We read the Scriptures together,

And spent long hours in meditation.

We had no lust, no pride,

And our needs were simple,

We sought only the greatest gift of all,

The gift of understanding,

For he who understands the world,

Can do himself no wrong.

You opened the inward eyes of my mind,

Until I gazed upon these stars,

And knew their meaning,