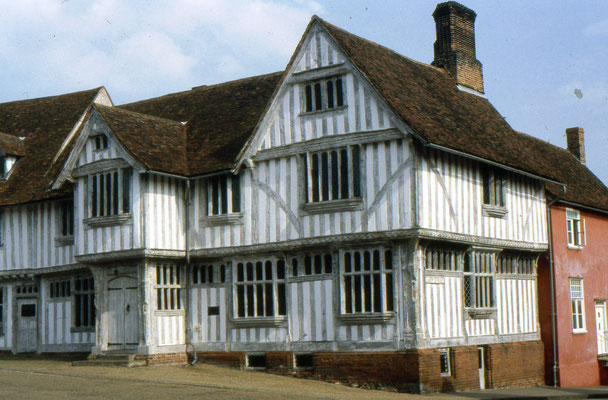 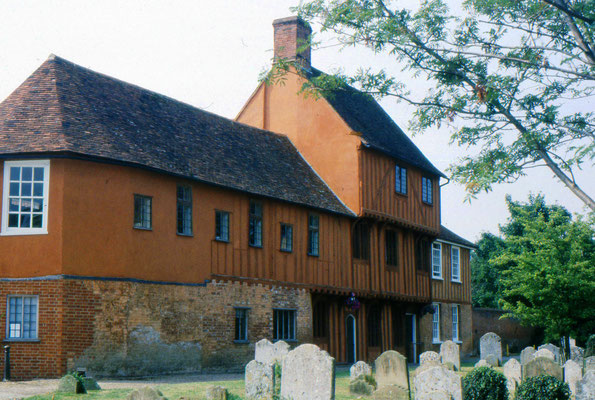 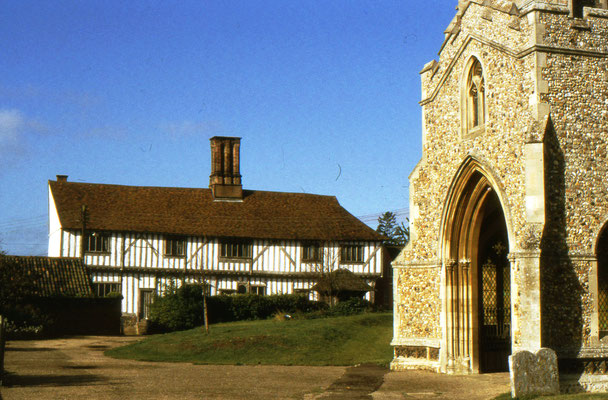 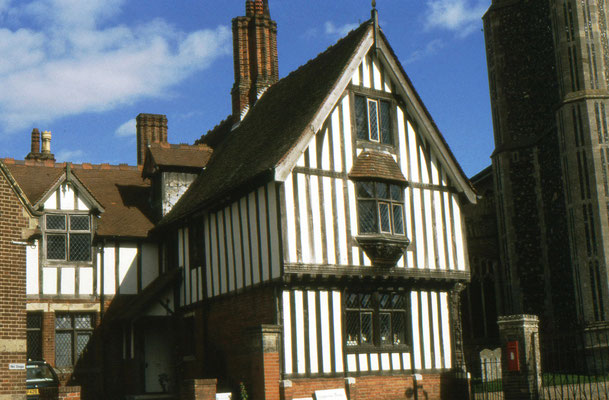 Suffolk is my home county so I have written much about Suffolk over the years. This is one of the first articles I had published in the old Suffolk Journal.

Wool was the wealth of Suffolk in the middle ages, and the rich legacy of that golden age is all around this charming English county, in the crooked-timbered merchant’s houses that grace so many towns and villages, in splendid churches that soar into vast blue skies above gently rolling landscapes, but most of all in a collection of magnificent mediaeval guildhalls.

The crown jewel of all the once-flourishing wool towns is, of course, Lavenham, its splendid twisting streets of colour-washed, crazy-angled, black and grey-beamed houses, all seemingly suspended in its sunlit nostalgic past. Take away the modern traffic, scatter the surrounding fields with a multitude of sheep, clothe its inhabitants in the wigs, frockcoats and stockings of yesteryear, and it might seem that time has frozen and that Lavenham is truly a living museum.

At its heart, now, as then in its glorious past, stands the Guildhall of the Gild of Corpus Christi, built in 1529, and perhaps the finest of all of Suffolk’s surviving guildhalls.

The wool trade thrived in Suffolk through the middle ages, not because of the superior quality of Suffolk wool, but because Suffolk, and East Anglia generally, had the prime advantage of being closer to Europe than any of the other English counties. Major waterways like the Stour, the Debden and the Orwell carried the woolsacks easily to the ports of Harwich, Woodbridge and Ipswich, supplemented by the pack horse convoys of the wealthy merchants that wended the convenient old Roman  roads from the wool towns to the coast. London was also within relatively short reach of the Suffolk wool centres, and so Suffolk was ideally placed to serve both the export and the home markets with its surplus wool.

The Dark Ages ended gradually in the eleventh century, with the slow curtailment of the Viking raiders and the restoration of some political order, allowing room for commerce and trade to develop. The textile and clothing markets flourished in the low countries and the Baltic, but  much of the land in Flanders was too water-logged and the sheep flocks suffered from foot-rot, and so these markets soon came to depend heavily on English wool. The coming of the Normans, although fiercely resisted by the luckless Saxon King Harold in the battle of Hastings in 1066, (The only date every English schoolchild remembers), at least led to the stability and security that attracted the wealthy foreign buyers from Europe to the growing wool towns of Suffolk and East Anglia.

The guilds which grew in wealth and power with the wool trade were the trades unions of the master craftsmen in an age before industrialization and the appearance of factories could concentrate productivity under one roof. Individual weavers, spinners, dyers and the rest worked mostly in their own homes, and the guilds were the mediaeval way of forming themselves into brotherhoods to protect their own interests in the regulation of trade, wages, prices and standards. The guilds elected their own warden and aldermen to act in the roles that would now be defined as the chairman and committee members to debate and manage their affairs, and their own inspectors to guarantee that the quality of work and goods was maintained. There was a strong sense of pride in ensuring the highest standard of craftsmanship.

However, the regulation of trade was not their only concern. They were a social force and most crafts made some efforts to see to the welfare of any members and their families who might fall on hard times through injury or old age. There were ceremonial and religious events to be recognized and supported, and each guild had its own livery to be worn when the occasion demanded. The guildsmen in their finery provided a proud and colourful element in every important procession and congregation that brought festive and feasting life to the wool towns.

Undesirable elements were not welcome, and before a craftsman could join a guild he would generally need to be a property owner of some standing. Membership tended to be passed carefully from father to son, although some exceptions were made and a membership might be bought after a long apprenticeship. The smaller guilds would meet in their own homes, or meeting houses, but the larger guilds were able to found the magnificent guildhalls, of which a few survive today.

Lavenham, at the height of its prosperity had four guildhalls. Two have disappeared with the passage of time. The guildhall of Our Lady still survives as part of the Swan Hotel at the bottom end corner of Lady Street. At the top end of Lady Street is, of course, the Market Square, faced by that magnificent, grey-toned, three-storied Guildhall of the Gild of Corpus Christi. Beautifully timbered with overhanging beams at first floor level, and gable windows jutting out of the slanting angles of its red-tiled roof, it has elegant oriel windows, a carved porch doorway, and on one corner post on the junction with Lady street, a carving that is believed to be of John de Vere, the fifteenth Earl of Oxford, who granted the guildhall its original charter.

In the nearby wool town of Hadliegh stands the second showpiece survivor of those prosperous middle ages when wool towns were Suffolk’s El Dorado. Set, like Lavenham, on the gentle river Brett, which provided the power to drive its mills and the running water to wash its wool, Hadliegh also generated the wealth to build its own prestigious guildhall in 1438. The wealthy clothier William de Clopton paid for this brand new Market Hall and rented it to the town at the nominal fee of one red rose per annum. After his death the grateful townspeople continued to pay the token sum, placing the annual red rose on Clopton’s tomb in Long Melford Church.

In its hey-day the Hadleigh Guildhall was the centre of commercial life and served as a meeting place for all four of the town’s major guilds; Corpus Christi, Our Lady, Trinity and St. John’s. Today it is still used for parish functions. It stands in the quiet heart of town, eye-catchingly resplendent in orche-red plaster with black timbers and beams, its central section rising to three stories and topped by red-brick chimneys. Across the old graveyard of grey, lichen-filigreed headstones it faces St. Mary’s church with its slightly-crooked silver spire soaring 135 feet above its fourteenth century tower. Beside the church is the red-brick Deanery tower, built in 1495 to serve as the Deanery Gateway. Here is the heritage centre of Hadleigh, almost out of sight and sound of the by-passing bustle of High Street traffic.

Guildhalls and churches go hand in hand in Suffolk, for in many cases it was the riches from the wool trade that also built the churches. The wool merchants were pious as well as wealthy, and by donating to the churches they guaranteed that the congregations would pray for their souls. In Eye the lovely two-storied black and white guildhall stands beside the overshadowing tower of the Church of Saint Peter and Saint Paul, both of them facing the rising grass mound topped with the few remaining walls of the ancient castle keep. The Eye Guildhall was built in the late sixteenth century, and carefully restored in 1875. An original carving of the Archangel Gabriel can still be seen on one of its wooden corner posts.

At Stoke-by-Nayland in the lovely Stour valley is another fifteenth century guildhall, again nestling in the comforting shadow of the mighty 120 foot high tower of its church companion. All over Suffolk the remaining guildhalls, the wool churches, and the multitude of fine timbered merchant’s houses all testify to the wealth and power of the golden age of wool.

There were ups and downs throughout the four centuries that the wool trade remained the dominant part of Suffolk’s commercial life. Political interference, swingeing taxes and foreign wars all took their toll in disrupting the smooth flow of trade. The guilds themselves were dissolved by Acts of Parliament in the late sixteenth century, falling foul of Protestant reformers because of their close associations with what then came to be seen as mediaeval religion. But finally it was the industrial age, the factory chimney and the factory siren, that signalled and sounded the death knell of the wool trade, and the boom times of the laden packhorse convoys and river barges carrying the white harvest to the coast. The scattered, individual craftsmen working in their own homes could not compete with the concentrated output of the factories. Good grazing pastures, clean-running rivers and a short haul to the coast, were no longer the crucial factors to commercial success.  Coal was the New King, and the factories went where there was coal on hand to power them. Suffolk had no coal, and suffered an irreversible decline, as the heart of the new industrial age shifted to the midlands and the north.

The age of the Suffolk wool barons is over.  The vast sheep flocks no longer bleat in summer snow-fields on every acre of lush grass. The stout, white-wigged and resplendently frock-coated burghers no longer rule the rural roost. The majestic guildhalls no longer throb and thrive with the hub-bub of daily bargaining and business.

But Sufffolk’s heritage remains, preserved in Lavenham, Hadleigh, Stoke and Eye, and almost any other Suffolk town that thrived in our golden age of wool.