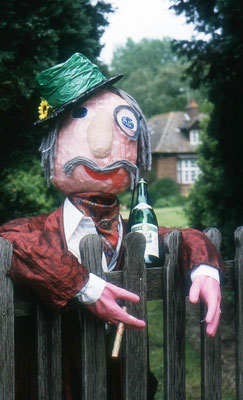 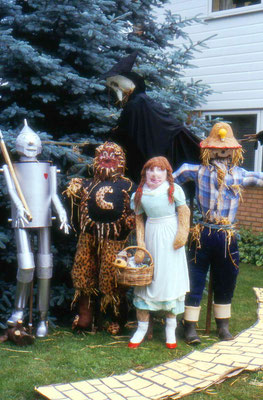 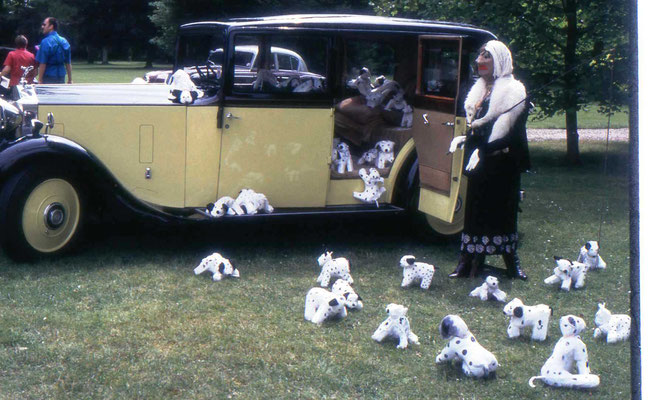 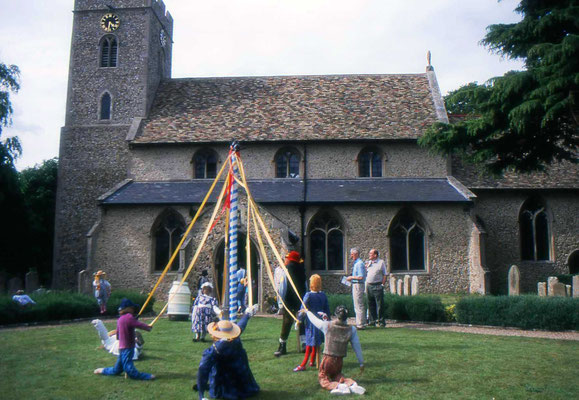 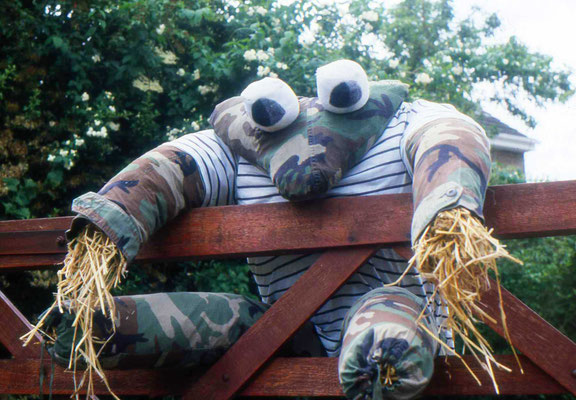 One of my earliest published articles was this little piece on what was then a new phenomenon of scarecrow festivals in the UK.

“On 13 June 1999, a world record 760 human-shaped scarecrows could be found around the village of Barton Mills, Suffolk, UK, all made by local residents.” That’s the official wording of the signed Guinness World Records Certificate that the proud people of Barton Mills have to show for that year’s record-breaking festival.

Since then they have repeated that effort, and established a craze for scarecrow festivals all over England.

“Almost the whole village gets involved and have great fun doing it,” Frances Lewis, the Scarecrows Committee Secretary told me enthusiastically, “And the people who come in to the village to see them enjoy it so much. All through the scarecrow weekend, everywhere you looked, there were scarecrows and great big smiley human faces.”

There were, by the police estimate, twenty-five thousand smiley human faces visiting Barton Mills for that year’s festival. In all there were 960 scarecrows on display, although only the human-shaped ones could be counted for the Guinness Book of Records. The assorted dogs, frogs, sheep, the millennium bug, and other exotic creatures, may have been surplus to the record count, but they certainly stood testament to the tremendous amount of village effort and imagination that were poured into the festival as a whole.

The group scarecrows included a complete scarecrow cricket team on a bungalow lawn; a scarecrow Dorothy and her scarecrow companions from the Wizard of Oz; an operation scene with scarecrow doctors and a scarecrow patient; a tied-down scarecrow Gulliver surrounded by scarecrow Lilliputians; and up at the Manor House a scarecrow Cruella de Ville complete with 101 scarecrow Dalmatians.

Even the Invisible Scarecrow was there. Or perhaps he wasn’t ! Perhaps it was just his hat, wellington boots and sunglasses?

However, the centrepiece of the festival was, quite fittingly, the lovely St. Mary’s Church. Here there was the complete scarecrow Nativity scene, with scarecrow sheep and scarecrow angels. While inside was an entire scarecrow congregation. The village schoolchildren had all made scarecrows to represent themselves, and sat them all in neat, straw-weeping rows in all the pews.

I talked to Frances, and to Liz and Colin Brotherton, who are also members of the nine-strong Scarecrow Committee, to find out how it all began. Liz and Colin had been on a visit to Kettlewell in Yorkshire four years before, and there they had spotted a scarecrow display in the local school. They brought the idea home and promoted it. “When we first started they all thought we were nutty,” Liz said with a laugh. “But then they started getting enthusiastic.”

The Scarecrows Committee is elected each year and includes three members of the permanent St. Mary’s Barton Mills Preservation Trust. The Trust was set up to maintain the fabric of the church building, and in 1999 the Scarecrows Festival raised seven and a half thousand pounds to that end. That sort of money takes a lot of the load off the shoulders of the church community, and frees up funds for other church needs, such as the missions they support.

“The money is a nice by-product,” Liz admitted. “But the whole idea originally was to get everybody in the village participating in something together. Normally they would be away at work all day, and then come home and just watch television, but this gives them something on which they can work together over evenings and weekends.”

“The great thing is that they’re all talking together, and doing things together, and exercising their imaginations.” Frances agreed. “In the lead up to the festival they’re all working in their garages, or you see straw bodies being taken for a walk up the street tucked under somebody’s arm. It’s not a controversial thing and people are ringing each other up and saying I’m doing this, and I’m doing that, and have you started yet. They’re all talking to each other with lovely big smiles. It’s all really about people having fun and being happy. The money it generates is great, but originally it was just about getting people together.”

The first Barton Mills Scarecrow Festival was in 1998, which went well despite a few hiccups. These were mostly problems with diverting and controlling traffic, feeding people, providing loos and car parking space. Fortunately Barton Mills is a good shaped village with a main road circling right through.  That helped in laying out the Scarecrow Trail for Visitors to follow, and in laying on the Scarecrow Shuttle, the free mini-bus service for the elderly and less agile.

Having got it off the ground in the first year they then got maximum publicity for 1999, especially as they had by then decided to go for that record and beat the previous total of 500. The television companies got hold of the story and it went out on the Friday evening news. So on the Saturday and Sunday they had visitors from as far afield as Northampton, Peterborough and Colchester.

“We had newspaper reports coming back to us from all over the country,” Liz recalled. “There was even a Wolverhampton paper which ran a feature promoting Barton Mills as the ideal weekend break.”

“It was really incredible,” Frances added. “We had at least one scarecrow in almost every garden. And there were actually more scarecrows on the Sunday, because after all the publicity, and seeing all the people who came on  Saturday, all the village people who hadn’t got a scarecrow decided they didn’t want to be left out. And they really did want to see us get that record, so even more scarecrows appeared overnight.”

There were more Barton Mills Scarecrow Festivals to come, and they were all by almost unanimous request. A survey in the village magazine asked if the village wanted another scarecrow festival and almost one hundred per cent of the responses said yes. The decision was put to the vote at a later meeting in the village hall and again they all said yes.

“So it’s not just the committee saying let’s do this,” Frances assured me. “It’s the whole village saying we want to do it.”

So now Barton Mills has become the annual host to a multitude of Worzel Gummidges and Aunt Sallys in all shapes, forms and guises.  The festival is non commercial and all events and functions are provided and run by the people of this very enterprising little village. It is organized by the Church Preservation Trust with all profits going to the church, but the main aim is for everybody, villagers and visitors, to thoroughly enjoy themselves.

Every festival is a fun-packed weekend of Scarecrows and Smiley faces. They may not be going for another record, but my guess is that with all that magnificent village spirit, effort and initiative, they’ll hold on to it anyway. So why not come along and be counted. You too can be a smiley face among the scarecrows.