FESTIVAL OF THE SEA 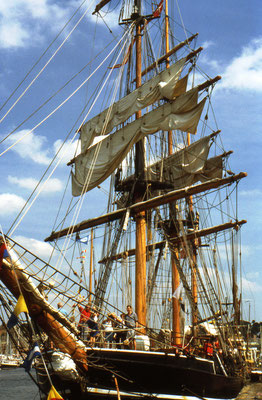 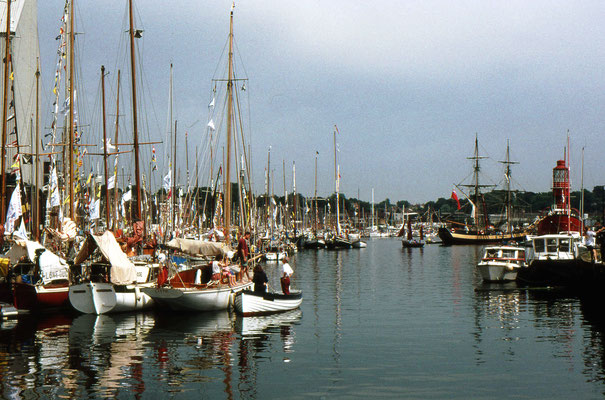 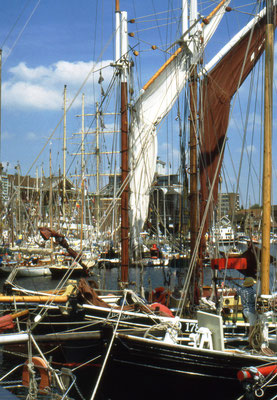 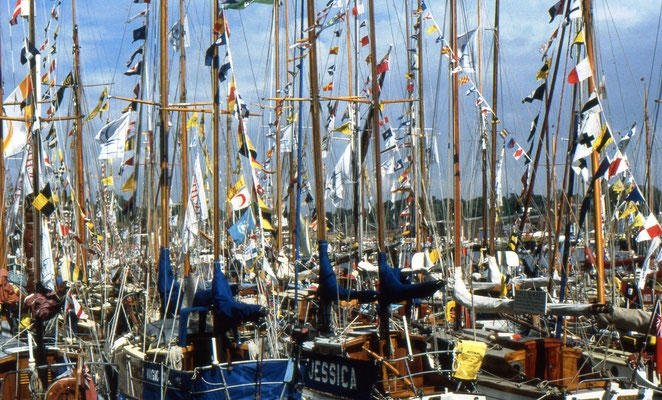 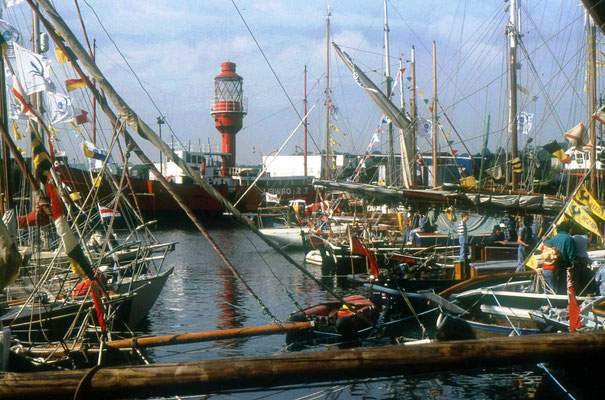 I wrote and published this article in 1999, since then the old Ipswich wet dock has been extensively renovated and changed but the feature is still an accurate picture of all the fun, fantasy and nostalgia of a major British Maritime Festival

FESTIVAL OF THE SEA

At first it was Ipswich Sail, and then Maritime Ipswich. The name was changed to give more scope to the range of vessels that could be encouraged to participate. But by any name it will still be East Anglia’s most spectacular maritime gathering of tall ships and small ships, sailors and shantymen, and all things salty, steam-driven and wind-blown, that sing or shout of our glorious heritage of the sea.

The festival celebrates the maritime history of Ipswich, a long tradition stretching back to the seventh century when the town and port were probably founded by the powerful dynasty of Anglian Kings who are best known through their burial site at Sutton Hoo. The town and trading centre were then called Gippeswic, meaning the trading centre at a corner of the Gipping; the corner being the sharp bend where the River Gipping turned into the Orwell, and out into the estuary toward the sea. That corner is still the site of the wet dock today.

For almost two hundred years the area suffered from the vicissitudes of Viking raids and Danish rule, and then the port prospered through the middle ages as a major outlet for East Anglian cloth, wool and agricultural produce. King John granted Ipswich its charter in the year 1200, and the town’s seal showed the first ship to have a fixed rudder instead of a simple oar.

In the thirteenth century war galleys were being built here for King Edward the First. In 1607 Bartholomew Gosnold sailed from Ipswich on a voyage to North America where he founded the first English settlement at Jamestown. In the eighteen-forties the new wet dock was built to accommodate the tall sailing ships and the new steamships of the nineteenth century, and the Port of Ipswich took on a new lease of life as trade increased to every corner of the world. In 1940 there were barges from Ipswich among that gallant fleet of little ships that sailed to bring about the evacuation from Dunkirk.

All of this, and much more, is gloriously remembered in what has now become this annual reunion and festive salute to all things nautical

Ipswich Sail in 1997 attracted two hundred vessels of all shapes and sizes, and some thirty-two thousand visitors passed through the gates of Ipswich’s wet dock during the two day festival to enjoy its multitude of attractions. In 1998 Maritime Ipswich drew three hundred vessels and thirty seven thousand visitors to see the dragon-boat regatta, and to watch the tall ships Phoenix and the Earl Of Pembroke taking on the roles of pirate raider and naval champion in a spirited display of kidnapping, cannon-fire, and swordplay. It was all enthusiastically-acted, blood-stirring stuff, and in a swashbuckling finale  the bold navy captain led his cutter crew in boarding the pirates to rescue his trembling daughters, and to bring the despicable Captains Nasty and Hookpiece to justice.

It was a display watched by thousands of visitors lining the quayside, and the imposing  steps of the Victorian Old Custom House with its columned facade, all shrouded in the lingering mists of cannon smoke as the booming echoes of the broadsides drifted away.

This year’s event due on the 19th and 20th of June promises to be even more spectacular than the previous two, with a Sea Creatures theme that will involve sharks and whales, diving bells and mermaids, and the brand new star of the show, Inky the Octopus. Jan Davies, the incredibly hard-working co-ordinator of this ever-growing annual event expects even more ships, and more visitors.

“We’re getting bigger and bigger,” she says positively. “We’re very enthusiastic and confident. The numbers keep going up and up. This year we’re expecting up to 400 ships and forty-thousand visitors. And we’re expecting by the Millennium to reach fifty thousand.

Jan spends sixty-five percent of her time almost all the year round in planning for this magnificent two-day celebration of East-Anglia’s sea-going tradition, with its heady mix of waterborne and quayside entertainment. The tall ships are so popular that their engagement diaries are fixed from one year to the next, and the armada of vessels that descend upon Ipswich for the festival are drawn from all over the world. In addition the shanty singers, Morris dancers, clowns and bands, workshops, Punch and Judy, the fun fair and the circus, and sky-blazing firework displays that end each day, all have to be organized.

It all has to come together at the end of June, but the marathon task of ensuring that it does has to commence  as soon as the last of the empty coke cans and pop-corn bags have been cleared away at the beginning of July.

“Putting a festival like this together is not a simple business like booking a park and hiring a band,” Jan explained. “This isn’t purely a marina, and although Ipswich people know that, the majority of outside visitors probably don’t realize that Ipswich is still a working wet dock. It has multi-varied ownership, so first you’ve got to get the backing and cooperation of all the factions that own and work the dock. Then you’ve got to transform the working dock into a festival site, and although the planning and organization is spread throughout the year, the actual transformation has to take place in a matter of days.

“It really is a major operation. Last year, right up until the Tuesday before Maritime Ipswich, the area where the festival theatre and the stage were finally erected was still covered with stacks of timber. That Friday we had to get the timber out, set up the stage and bring in the flowers. At the same time we already had two tall ships in, but there was a huge tanker moored just past the Custom House and still loading grain.

“The harbour master tried his best to get the tanker moved on the Friday-morning tide, but then she had to have some maintenance work carried out, and so we couldn’t get her moved until the afternoon. The boats that were coming in couldn’t moor there until she had cleared the dock, and in the meantime we had to barricade the area off to comply with health and safety regulations. So it’s all very hard work. To walk the site on the Saturday before the show, and then walk it again on the Thursday and see the difference is almost unbelievable. It’s like a miracle!”

A miracle it may be, but it keeps happening. 1997 saw the French sailing ships well represented with three of their splendid square riggers. Last year saw the magnificent Sail Training Association schooner The Malcolm Miller paying a visit, together with the brig Phoenix and the three-mast barque The Earl of Pembroke, the two ships which played their roles so rumbustiously in that classic pirate battle. This year the tall ships will include the polish barquentine Polgaria, and the Shtandart, the replica of St. Peter The Great’s brigantine which has just been completed in renamed St. Pertersberg, and will be calling at Ipswich as part of her maiden voyage. And, as always, the upper reaches of the dock beyond The Old Custom House, will be a waterborne mass of the rigging and masts of the smaller ships, all decked out in their multi-coloured finery of flags and bunting.

The shantymen will be back, singing of old ships, and fearful storms, fishing and whale-hunting, and all the old working songs that seamen used to sing to keep time as they hauled up the sails or hauled in the anchor. No doubt there will be a few grog and ale drinking songs as well, and plenty of opportunity to join in with both the choruses and the consumption.

Although there will be plenty to interest and involve the adults, the highlights again will cater for the children. The fancy dress parade will feature sea creatures in place of pirates, so there will be plenty of little mermaids vying for first prize with little sea serpents and little sea monsters.  There’ll be a funfair and  a vast assortment of entertainments. There’s an aquarium and an undersea exhibition, and of course, Inky the Octopus, the new top attraction specially commissioned for this year’s show.

Next year Maritime Ipswich is planned to form part of Millennium Maritime Britain, the huge national millennium festival of the sea. It will begin at Canary Wharf where a ten day festival is planned, and then the whole flotilla of vessels will circumnavigate England with Ipswich as the first of twenty showcase festivals that will be their ports of call.

The whole plan is to get all of the large and small maritime festivals involved in the one big event, and Ipswich, as far as the boating world is concerned, is definitely one of the major highlights of the round-Britain voyage.

As Jan Davies says, Maritime Ipswich just keeps getting bigger and bigger, and better and better.