KINGS LYNN AND THE HANSEATIC LEAGUE 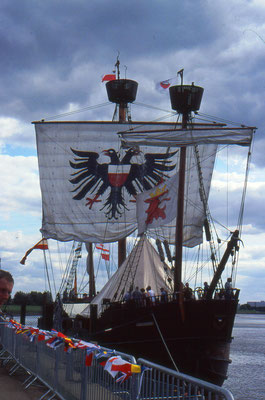 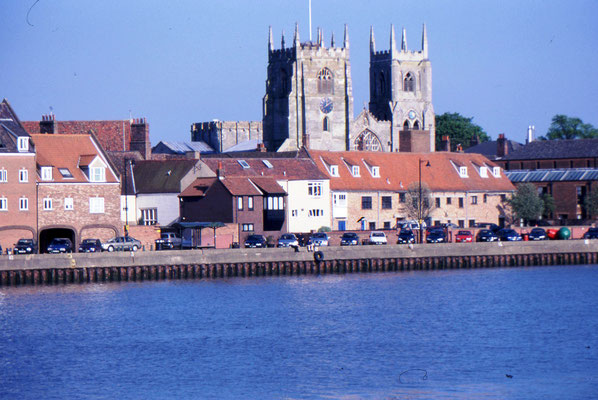 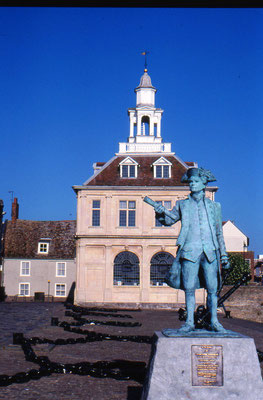 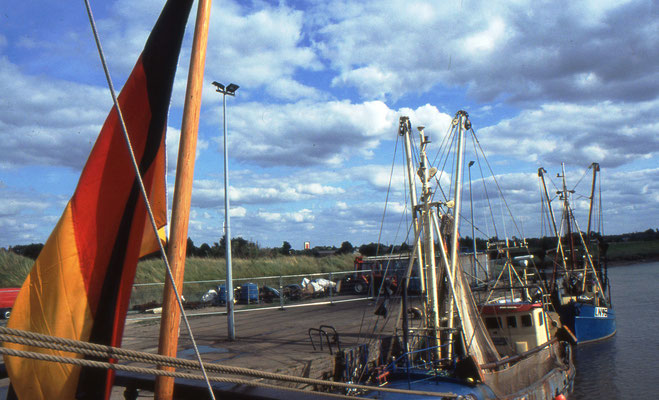 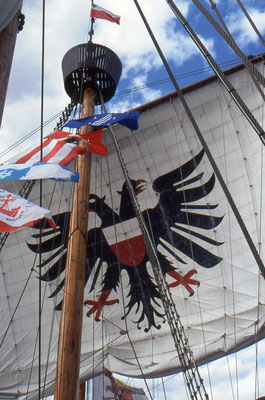 KING’S LYNN AND THE HANSEATIC LEAGUE

The undoubted highlight of the 2009 Kings Lynn Maritime festival was the appearance of the reconstructed 15th century caravel the Lisa Von Lubeck. The sturdy little two mast sailing ship with her high wooden bows sailed into the Great Ouse and moored up at Boal Quay. The two headed black eagle with its out-spread wings, the proud symbol of the old German Hanseatic League, was gallantly displayed on the stiff white canvas of her mainsail.

The ship was a World Heritage project built in the old Hanseatic city of Lubeck, her German home port, and took five years of dedicated construction work between 1999 and 2004. Approximately 350 people worked on the ship and two thirds of those were young adults who were previously unskilled in any knowledge of carpentry, engineering, sail-making, or any of the other skills in boat building.

It was an impressive accomplishment when you saw her in full sail on a fine, sunny morning. The high castles fore and aft were originally designed to enable soldiers and crew to ward off attacking pirates. However, on this passage through The Wash there were only smiles and waves to greet her.

Ships like these were regular visitors to King’s Lynn during the 13th to 15th centuries when Lynn was one of the major ports in England and the Hanseatic League of Germany virtually ruled the North Sea and The Baltic. During this period the German Merchants of this great maritime guild were the dominant political and economic power. Their trading empire covered more than eighty ports and towns, including Lubeck, Hamburg and Bremen in Germany, with trading outposts in Holland and Scandinavia and in Russia at Novogrod and Vladivostock.

In England they had trading posts in Lynn, Boston and Steelyard in the Port of London. Lynn and Boston were particularly important because of their direct sea links to Northern Europe.

Hanse was the German word for guild or association and the German Hansa was initially formed to protect German ships and German trade from robbers and pirates. It built lighthouses and trained pilots. However, it soon expanded to organize and control trade for its own benefit by negotiating commercial privileges and establishing trading bases overseas. It’s aggressive and protectionist trading practises, the use of embargoes and blockades and occasionally the alternative ploy of threatening to withdraw its trade, soon gave it a monopoly that swamped all foreign competition.

The League traded in grain and timber, fish and furs and flax and honey, carrying cargoes between Russia, Germany, Norway and Flanders, and in England to and from Boston and Lynn. The cargoes that flowed outward from the wash ports were usually grain and salt, cloth and wool.

The League ships also carried passengers, many of them pilgrims disembarking at Lynn to make the last part of the journey overland on foot to the great Abbey shrine at Walsingham. The Augustinian abbey which cared for those mediaeval pilgrims is in ruins now, although modern pilgrims still come to visit the new church at what has always been known as England’s Nazareth.

There are still many parts of King’s Lynn that would have been familiar to the visiting German sailors and the resident German merchants.

Foremost would be their former Kontor, or trading post, which was the old warehouse complex fronting the quay beside the narrow cobbled street of St Margaret’s lane. It was close to St Margaret’s Priory Church, the Old Saturday Market Place, and the Holy Trinity Guildhall, all of which would also have been familiar sights in mediaeval times.

The property was purchased by the League in 1475, soon after the treaty of Utrecht had ended several years of Sea Warfare. Commercial relations between England and the League had deteriorated after English privateers seized the League’s Bay salt fleet which operated between south-west France and the Baltic in 1449. Several years of conflict ensued before the Urecht treaty restored peace and gave the Germans most of their commercial aims. These included the free gifts of their former trading posts at Steelyard and Boston and a new one at King’s Lynn.

Here the German merchants now had their permanent lodgings, warehouses to store their goods, their offices and stalls and shops. They redeveloped the site in the late 1470s when the two warehouses were built and occupied their new trading post until the late 1560s.

The Port of Lynn was now the key crossroads of the Anglo-Hanseatic trade between East Anglia and Prussia. Lynn merchants were also active in the same trade routes and in the Greenland whaling and the Iceland cod fisheries, but the Hanseatic traders were always the largest group of foreign merchants in the town.

The wash ports of Boston and Lynn were now ranked only slightly below London and Southampton among the four greatest ports in England. These were the days when the quaysides at Lynn were jam-packed with ships, and the skyline became a swaying forest of tall masts and rigging.

The magnificent Holy Trinity Guildhall was rebuilt in the 1420s. It stands facing the old Saturday Market Place and St Margaret’s Church. It has a tall, monolithic porch front beside a high gable over a massive arched window more befitting a cathedral. The whole frontage is splendidly decorated with chequerboard flints.

In November of 1473 the King’s representatives stood in the main hall of the Holy Trinity Guildhall to announce to Lynn’s merchants the details of the new Treaty of Utrecht. Once established in their new krondor the German guildsmen would have been frequent visitors here.

Prior to establishing their own trading post the visiting German merchants had always preferred to find lodgings in King Street which in those days was known as Stockfish Row. They would have been familiar too with St George’s Guildhall, which still survives and is now an Arts Centre. King Street would have been their first choice to establish their new trading post but at the time there was no land there available for sale.

The quays and the river have all shifted and changed since the 13th and 14th centuries. The Purfleet harbour would have been about three times its current width, extending as far as Baker Lane where excavations in 1968 revealed the remains of timber supports of the old quayside.

The old Custom House with its white timber lantern tower that now stands on Purfleet Quay was not built until 1683. It would become the prominent landmark for ship’s sailing into Lynn for the next three hundred years, but before that, during the Hanseatic period, the major landmarks would have been the Greyfriars tower and the twin towers of St Margaret’s Church.

The Greyfriars Tower is all that remains of the Franciscan Friary that flourished here through the 13th to 15th centuries. It points a single, tall red brick finger to the sky and stands in a small tree lined park that is an open green space in the old heart of the town.

St Margarets is one of the largest town churches in the country, close to the river where the twin towers rise above the cobbled streets around the warehouse site of the old krondor. It was founded in 1101 by Bishop Herbert de Losinga who also built Norwich Cathedral. The priory’s fortunes went hand in hand with the mediaeval growth of the town and the two massive towers were begun about the middle of the 12th century. They were not complete until almost a hundred years later.

The priory was dissolved in the 1530s and in a ferocious storm in 1741 the spire and the top of the North West tower came crashing down into the nave.  Today this historic church is restored and rebuilt, and still continues its 900 year old tradition of welcoming visitors and pilgrims.

The German Hanseatic League began to decline in the sixteenth century and British and Dutch Naval power grew. There was also a shift in trade routes as the new colonies were discovered beyond the Atlantic. The seaports on the west coast of England took the lion’s share of the new trade, and Liverpool and Glasgow replaced Boston and Lynn as the key players.

The League’ trading post at Lynn was finally leased back to Lynn merchants as the Germans withdrew. By this time the river itself had receded and the old trading post was sold for £800 in 1751. It was then remodelled to become St Margaret’s house, the fine Georgian mansion that we see today. The second warehouse nearby that still faces the South Quay is now restored as the Green Quay café and the Wash Discovery Centre.

The original Hanseatic League’s diet, its assembly of guild associations, met for the last time in 1669. However, a new Hanseatic League has now been revived. Mercantile domination has been replaced with the fostering of business links and the promotion of culture, heritage and tourism between the member towns and cities. It boasts 177 members and the only English town listed is King’s Lynn.